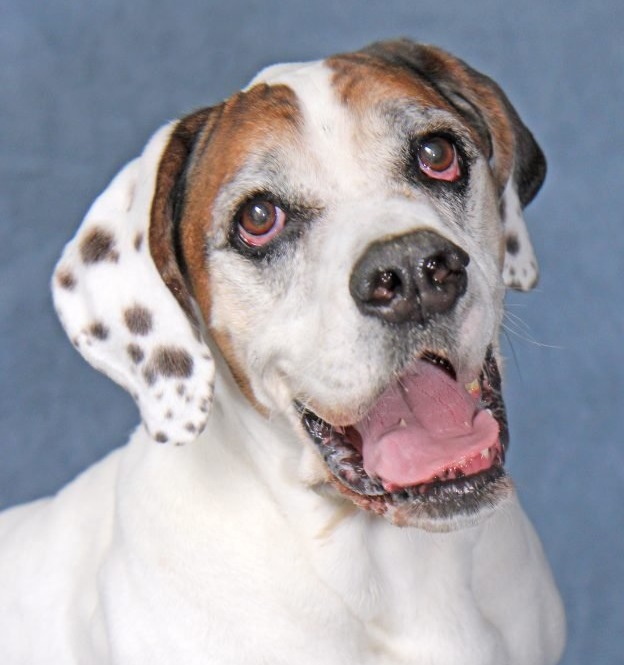 Dill is a big dog on a short dog’s legs. He’s bulky and solid like a Bull Dog…with the nose and ears of a Basset. He follows his nose.

Dill is bored in his kennel, so he “talks” to people passing by. He has a big voice, so people don’t take time to get to know him. This is common at shelters. It’s usually a kennel behavior that goes away when they get home.

Outside his kennel, Dill is not a barker. He’s very much a snuggler. He needs regular activity to burn up his energy. He will follow his nose when he goes on walks, and expect you to go along. When he’s back home he loves to cuddle.

He’s selective about his friends. He might do best as the only dog in his new home. He would love to have a yard where he can run as fast as his short legs can carry him.

Dill’s was surrendered to Rancho Coastal Humane Society when his family situation changed and they moved. Now he’s ready to settle in and become a part of his new family….and that’s going to happen right away.

Remember….Dogs are part of our lives….but we’re their whole lives. As soon as you get a pet, make a backup plan.

Meet dogs available for adoption from your Rancho Coastal Humane Society on Thursday, June 7th from 6:30 to 9:00 PM during the annual Paws and Pints event at The Lot La Jolla, 7661 Fay Avenue in La Jolla. 100% of the proceeds will be donated to Rancho Coastal Humane Society and FACE Foundation. For more information contact La Jolla Veterinary Hospital at 858-454-6155.